Celecoxib is a well known non-steroidal anti-inflammatory drug (NSAID) and extensively employed for the treatment of arthritis. The aim of the present study was to design, develop and optimization of micro particulates system, for colon specific delivery of celecoxib for both local (in prophylaxis of colorectal adreno-carcinoma) and systemic (in chrono-therapeutic treatment of arthritis) therapy. The aim of the present work was to elucidate the effect of formulation variables e.g., amount of eudragit polymer (X1), surfactant concentration (X2) and agitation speed (X3) on in-vitro release profiles (Y1-Y3), drug entrapment efficiency (Y4) and particle size (Y5) of micro-particulates system of celecoxib. Microspheres were formulated with the combination of ethyl cellulose (EC) and eudragit RS100/eudragit S100; by using a novel quasi emulsion solvent diffusion technique. Developed formulations were characterized and evaluated on the basis of FTIR, thermal, particle size, SEM and XRD analysis. The formulation variables were optimized by response surface methodology (RSM). Best optimized delayed release formulation was further subjected to the in vivo x-ray studies to evaluate the site specificity. It was found that in-vitro release (Y1-Y3 ) decreased significantly (p<0.05) with increase in amount of eudragit polymer but increased significantly (p<0.05) with an increase in surfactant concentration and stirring speed. FTIR study indicated that no strong chemical interaction took place between the drug and excipients of prepared formulations. DSC and XRD studies indicated that drug was present in the amorphous state. The X-ray photographs revealed that the swelling layer eroded from the outer surface and a size reduction was seen after 6 hrs when optimized microspheres reached the site of colon. Therefore, this approach suggested that the combination of eudragit S100 and ethyl cellulose microspheres may be useful for the delivery of maximum amount of celecoxib in intact form to the colon. 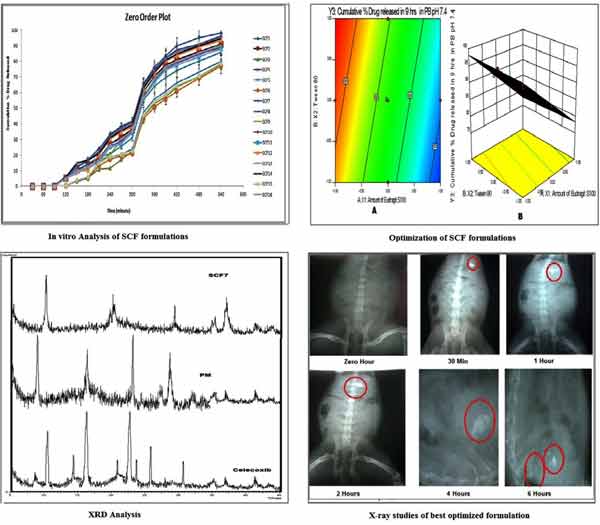