The aim of the present research work was to formulate and evaluate the extended release matrix pellets of nevirapine using extrusion and spheronization technique which will be an alternative technique for making extended release dosage forms and to compare the drug release profiles of the formulations with the reference product. In vitro dissolutions were carried out in 0.04M Phosphate buffer pH 6.8 with 2% w/v SLS (sodium lauryl sulphate) for 24 hours with USP type I apparatus at 75rpm. The drug release from the optimised formulation was comparable to that of the reference product and follows first order kinetics followed by non-fickian transport mechanism of drug release which confirms the drug release pattern involves complex mixture of diffusion and erosion. The similarity factor, f2 value of optimised formulation was found to be 70, which shows that the developed formulation was comparable to that of the reference product. 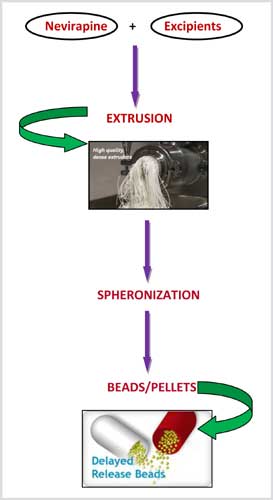