Development and Characterization of Novel Medicated Nanofibers Against Periodontitis


Periodontitis is an inflammatory disease of gums involving degeneration of periodontal ligaments, creation of periodontal pocket and resorption of alveolar bone, thus disrupting the support structure of teeth causing their loosening and finally removal. Since this disease is mainly confined to the periodontal pocket, so site specific drug delivery of an antibiotic is the best suitable option. This also eradicates the demerits of oral dosing like low drug concentration reaching the target site and the various systemic side effects. In the present work, an efficient and easy technique of electrospinning has been used to develop non-woven drug loaded and biodegradable nanofiber patch with inbuilt property of high surface area to volume ratio. Hyaluronic acid (HA) has been used specifically as the polymer since it possesses remarkable properties like providing an extracellular matrix supporting tissue regeneration, anti-inflammation and mucoadhesion. A blend of this natural polymer with another polymer (Polyvinyl alcohol) has been tried since HA alone cannot be electrospun efficiently as it shows very high viscosity at very low polymer concentration. The developed formulation presented controlled release behavior with good mucoadhesive strength. The in vivo studies confirmed the maintenance of minimum inhibitory concentration (MIC) over an extended period of time in addition to a significant antiinflammatory effect. All these observations suggested that the above formulation forms a stable intra periodontal pocket drug delivery system. 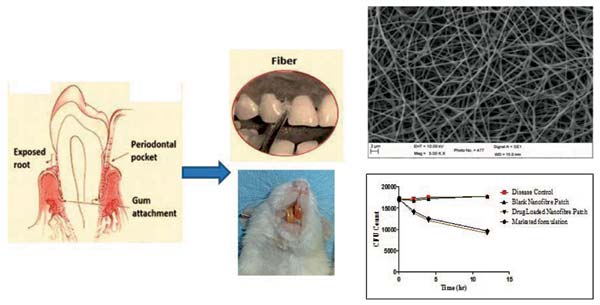