The rationale behind present work was to formulate a novel cream containing microsponges of miconazole nitrate to provide prolonged release. By means of quasi-emulsion solvent diffusion method using Eudragit RS-100 with different drug-polymer ratios microsponges were prepared. In the direction of optimizing microsponge formulation, diverse factors that affect microparticles physical properties were also investigated. Microsponges were characterized by SEM, DSC, FT-IR and particle size analysis, and also evaluated for morphology, drug loading and in vitro drug release. The drug polymer ratio reflected notable effect on drug content, encapsulation efficiency and particle size. It has been found that there was no chemical interaction between drug and polymers used as revealed by FT-IR and DSC spectra. SEM micrographs exposed that microsponges were spherical, with porous surface and have had 26.23 μm mean particle size. The microsponges were then incorporated in cream; which showed viscous modulus along with pseudoplastic behavior. In vitro drug release results depicted that microsponge with drug-polymer ratio of 1:2 was more efficient to give extended drug release of 78.28% at the end of 8 h; while conventional formulations get exhausted incredibly earlier by releasing 83.09% drug at the end of 4 h only. Thus the formulated cream containing microsponges of miconazole nitrate would be a promising alternative as compared to conventional therapy for secure and efficient treatment of acne and other topical infections. 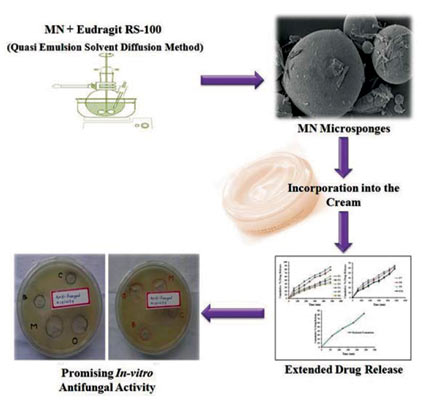