Ranitidine HCl is an H2-antagonist that suffers from low oral bioavailability of 50%. The site-specific absorption from the upper part of the small intestine and the colonic metabolism of the drug could partially contribute to its reduced bioavailability. To surmount these drawbacks, this work aimed at the formulation of Ranitidine HCl gastroretentive floating-biaodhesive tablets. A 32 factorial design was applied to assess the effects of matrix former (HPMC K100M): drug ratio, and the release retardant (Carbopol 971) amount on the characteristics of the tablets prepared using direct compression technique. The prepared tablets were thoroughly evaluated for physical properties, floating, swelling, bioadhesive and in vitro release behaviors. Statistical analysis of the results revealed significant effects for both formulation variables on the swelling index, maximum detachment force and cumulative percent drug released after 6 hours. In addition, the matrix- former: drug ratio showed a statistically significant effect on the floating lag time. Kinetic analysis of the release data indicated Higuchi diffusion kinetics and anomalous transport mechanism for all formulations. Scanning electron micrographs of the selected tablet formulation; F8, revealed intact surface without any perforations or channels in the dry state, while polymer expansion (relaxation) with some perforated areas were observed on the surface of the tablets after 12 hours dissolution in 0.1 N HCl. Furthermore, in vivo abdominal x-ray imaging showed good floating behavior of the selected formulation; F8, for up to 6 hours with appropriate bioadhesive property. In conclusion, the selected ranitidine HCl floating-bioadhesive tablets could be regarded as a promising gastroretentive drug delivery system that could deliver the drug at a controlled rate. 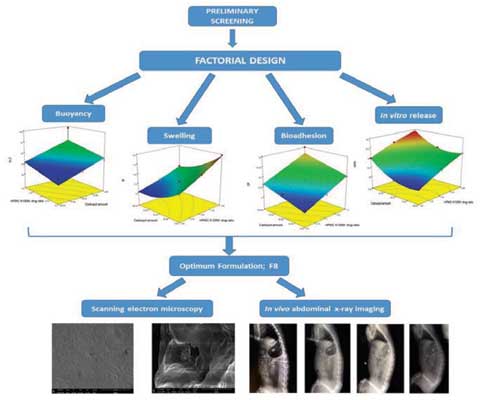