Over the last decade, it has become evident that in mammals, including humans, heat shock protein 70 (HSP70), apart from its intracellular localization, is found in extracellular space, where it may execute various protective functions. Furthermore, the upregulation of HSP70 family members can be beneficial in the prevention and treatment of various human neurodegenerative diseases and cancer. Here, we demonstrate that recombinant human HSP70 after intranasal administration can penetrate various brain regions of mice in its native form and subsequently undergo rapid degradation. It was also shown that labeled HSP70 added to culture medium of different human and mouse cell lines enters the cells with strikingly different kinetics, which positively correlates with the basic levels of membrane bound Toll-like receptors (TLR) that are characteristic of these cell lines. HSP70 administration does not significantly modulate the level of TLR expression at the protein or RNA level. The degradation of the introduced recombinant HSP70 after entering the cells is likely proteasome-dependent and varies significantly depending on the cells type and origin. These results should be considered when developing HSP70-based therapies. 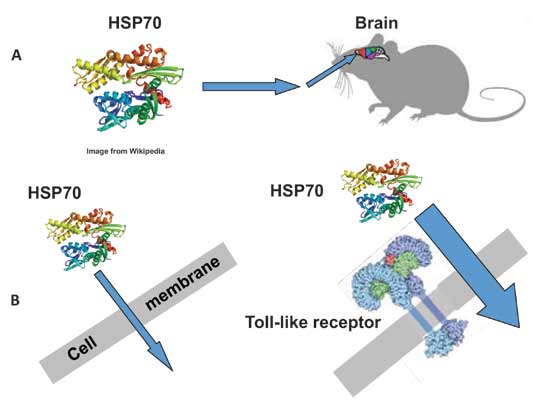