Methods: The effect of EC viscosity grade and drug:polymer ratio was investigated on microcapsule properties (yield, particle size, morphology, surface characteristics and drug release). Differential scanning calorimetry (DSC) and X-ray powder diffraction (XRD) were implemented to study the interaction and solid state of drug. The microcapsules were compressed in the presence of excipients and drug release was evaluated.

Results: The yield of microencapsulation and encapsulation efficiency at 1:1 drug:polymer ratio was dependent on EC viscosity. Microcapsules were spherical with some pores on their surfaces. The number of pores was more and their size was bigger for EC 100 cP microcapsules. Theophylline remained in crystalline form after encapsulation. DSC studies confirmed lack of interaction between drug and polymer. The drug release was rapid at 2:1 drug:polymer whilst it was slowed down at 1:1 drug:polymer ratio. Microcapsules obtained from EC 100 cP showed slightly faster drug release at latter ratio. Marginal changes in release rate were observed after compression of microcapsules.

Conclusions: All viscosity grades of EC were able to sustain the release of the drug from microcapsules. Considering the similar release profiles for microcapsules prepared from different viscosities of EC, the use of lower viscosity grade of EC is recommended due to the ease of production and also less processing time. 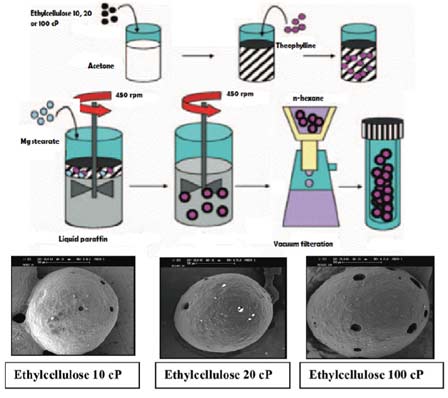