Preparation and Optimization of Moxifloxacin Microspheres for Colon Targeted Delivery Using Quality by Design Approach: In Vitro and In Vivo Study


Background: Gut microbiota has a significant role in the pathogenesis of diabetes. Colonic microflora modulation using an antibiotic might have an emerging role to treat the metabolic disorders. The present study was aimed to optimize the Moxifloxacin loaded chitosan microspheres (MCMs) by emulsion cross linking method for colon targeted delivery to alter the microflora.

Results: FTIR spectroscopy of MCMs confirms the absence of chemical interactions during the formulation. MCMs were found to be smooth, spherical with particle size around 20μm. An enteric coating of MCMs prevented the drug release in the acidic environment of the stomach and ileum with complete release at the colon. MCMs had followed the korsmeyer - peppas model of drug release, indicating the drug release by non-fickian diffusion pattern. MCMs showed significant in vitro antimicrobial activity against Lactobacillus casei and Escherichia coli. In vivo results of MCMs exhibited prolonged antimicrobial effect of drug in the cecal content of rats. Significant protective activity observed in the ileum and colon histology in rats treated with MCMs compared to the pure drug.

Conclusion: MCMs were formulated by emulsion cross linking method using QBD approach. An enteric coating around the microspheres prevented the premature drug release at upper gastrointestinal tract, while chitosan cross linking has provided the sustain release of the drug in the colonic region over the time. 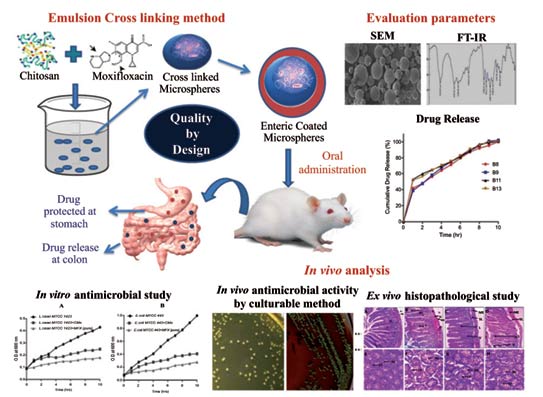