Objective: The aim of this paper was testing CyD1 expression in human lung and colon tissues after the application of an inflammatory stimulus, and verifying its gene silencing by using siRNA for CyD1 (siCyD1). Method: Colon and pulmonary biopsies were treated with siCyD1 by using two different transfection carriers: a) invivofectamine and b) ad hoc produced nanoliposomes. After 24 hours of incubation with nanoliposomes encapsulating siRNA or invivofectamine-CyD1siRNA, in presence or absence of ECLPS, we analysed the protein expression of CyD1 through Western-Blotting. Results: After EC-LPS treatment, in both colon and pulmonary biopsies, an overexpression of CyD1was found (about 64% and 40% respectively). Invivofectamine-CyD1 siRNA reduced the expression of CyD1 approximately by 46% compared to the basal condition, and by around 65% compared to EC-LPS treated colon samples. In lung, following in vivo fectamine siRNA silencing in the presence of EC-LPS, no reduction was observed. Ad hoc nanoliposomes were able to enter colon and lung tissues, but CyD1 silencing was reported in 2 colon samples out of 4 and no efficacy was demonstrated in the only lung sample we studied. Conclusion: The silencing of Cyclin D1 expression in vitro “organ culture” model is possible. Our preliminary results encourage further investigations, using different siRNA concentrations delivered by nanoliposomes. 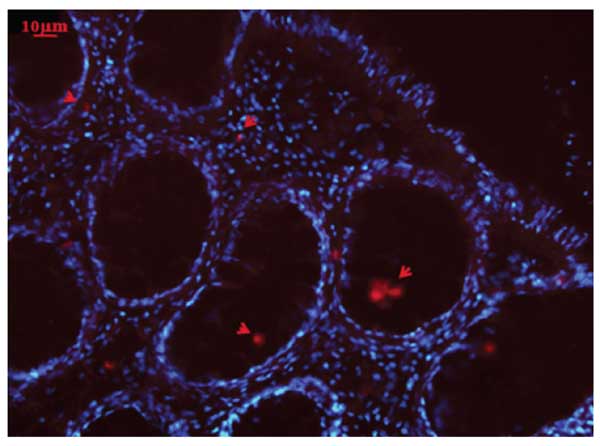