From Genesis to Revelation: The Role of Inflammatory Mediators in Chronic Respiratory Diseases and their Control by Nucleic Acid-based Drugs


Asthma, chronic obstructive pulmonary disease, cystic fibrosis, and idiopathic pulmonary fibrosis, are among the most common chronic diseases and their prevalence is increasing. Each of these diseases is characterized by the secretion of cytokines and pro-inflammatory molecules which are thought to play a critical role in their pathogenesis. Moreover, immune cells, particularly neutrophils, macrophages and dendritic cells as well structural cells such as epithelial and airway smooth muscle cells are also involved in the pathogenic cycle of these diseases. There is a pressing need for the development of new therapies for these pulmonary diseases, particularly as no existing treatment has been shown to reduce disease progression. HMGB1 (high-mobility group box 1), originally identified as a nuclear non histone protein with DNA-binding domains can be secreted by living and dying cells and it is now regarded as an important endogenous danger signaling molecule. Besides as a signal of tissue injury, HMGB1 is considered a powerful mediator of inflammation and high levels of HMGB1 are found in chronic lung diseases. The role of HMGB1 in respiratory diseases is still elusive nevertheless these studies suggest an involvement of this cytokine in their pathogenesis. Nucleic acid-based drugs (NABDs) are a novel class of pharmaceuticals including antisense oligonucleotides, DNA-zymes, and RNA interference as mediated by small interfering RNA (siRNA), which are used to dampen the expression of disease-causing genes having therapeutic potential for controlling chronic airway diseases. Due to their inherent difficulties, such as for example sensitivity to endonucleases, their delivery in vivo should be assured by vectors. Non-viral lipid- and polymer-based nanosystems have acquired much importance in this context. In this review, we will discuss these emerging tools in gene therapy of chronic lung diseases, particularly the use of siRNA in the down-regulation of critical molecules in the pathogenesis of chronic lung diseases, with particular emphasis on HMGB1 as therapeutic target. 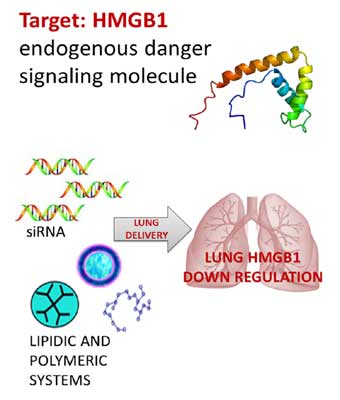