Background: Dementia cases are increasing as the population ages, leading to increased financial costs. Several neuronal diseases including ischemic and hemorrhagic stroke involve cerebrovascular injury or pathophysiology. Cerebrovascular injury is closely tied to blood brain barrier (BBB) disruption. Many studies have shown a significant association between BBB dysfunction and neurological diseases. Therefore, an understanding of the molecular mechanisms which regulate BBB permeability and disruption is essential for establishing future therapeutic strategies to alter dementia disease progression related to cerebrovascular injury, so-called vascular cognitive impairment (VCI). microRNAs (miRs) are small non-coding RNAs that regulate gene expression through targeting of mRNA transcripts. miRs have been implicated in the development and progression of various illnesses, including vascular disease. However, the role of miRs in BBB breakdown or permeability and VCI development has not yet been well clarified.

Method: Research content related to the origins of VCI and the role of the BBB in pathologic development and therapeutic targeting are reviewed, including current relevant animal models. We draw from the published literature regarding microRNA candidates that are associated with modulation of BBB structure and function. Results: In this review, we summarize the current knowledge about VCI, explore the potential role of miRs in BBB breakdown and VCI progression, and identify potential candidate miRs for development of new treatment strategies. Conclusion: miRs constitute a promising novel avenue as future therapeutic options for alteration of both BBB permeability and development of VCI. 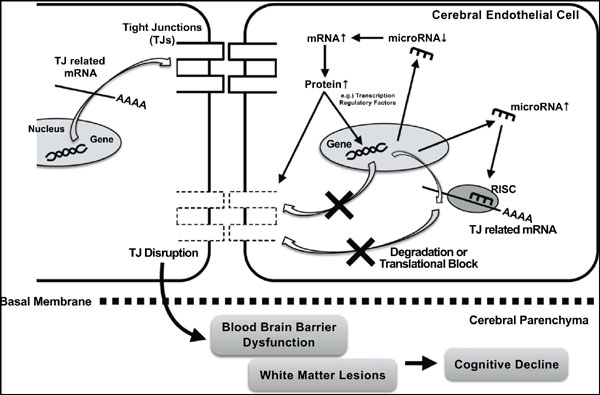