Self-Assembling Organogels Based on Pluronic and Lecithin for Sustained Release of Etodolac: In Vitro and In Vivo Correlation


Background: Etodolac, a member of non steroidal anti-inflammatory drugs (NSAIDs), has a poor aqueous solubility. Long term administration of etodolac causes severe gastrointestinal disturbances such as peptic ulcer and bleeding. These disturbances could be overcome by alternative routes such as a topical administration.

Method: In the present study, pluronic lecithin organogels (PLOs) were prepared by simple mixing of pluronic solution with lecithin solution. Etodolac was loaded into the prepared gels or added during the gel formation. The physicochemical properties of the modified organogels were investigated by different analysis including visual inspection, pH determination, viscosity, spreadability and extrudability. Also, the in vitro release studies of etodolac in the presence of different penetration enhancers were carried out. The anti-inflammatory behavior of the prepared etodolac organogel was investigated using carrageenan induced paw edema test.

Results: The results indicated that the prepared organogels showed good physicochemical properties. The organogels, containing a combination of tween 80 and oleic acid as penetration enhancers, showed the highest percentage of drug release.

Conclusion: All tested organogels showed a significant oedema inhibition compared with oral indomethacin ® and Voltaren® as a topical marketed anti-inflammatory drug. Moreover, the increase of drug concentration from 1% to 5% w/w is accompanied with a longer duration of action up to 12 hrs. Therefore, the formulated organogels are considered as a promising vehicle for controlled topical delivery of etodolac. 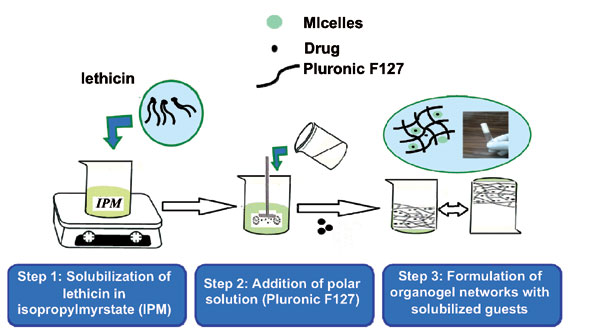