Formulation and Characterization of Anthocyanins-Loaded Nanoparticles


Background: Açaí berry, from the Euterpe oleracea Mart. Palm, has been described as the most important fruit in the Brazilian Amazon. Several studies have reported that anthocyanins (ACNs), one of the components of the açaí, have enormous potential for pharmaceuticals applications. However, the bioavailability of anthocyanins is relatively low compared to that of other flavonoids. Then, in the present work, anthocyanins-loaded nanoparticles have been developed to overcome their poor bioavailability.

Results: PEG 2000 was the only individual factor that has statistical significance (95% confidence level). The process yields (PY) were found in between 67% and 92%; the particle size and morphology analysis showed two distribution size, one for NPs and another for the agglomerates.

Conclusion: The pH-sensitive polymer together with the hydrophilic polymer showed to be suitable as ACNs delivery system. The delayed release profile of ACNs, observed for all formulations, can enhance their poor bioavailability. Nevertheless, ACNs bioavailability in vivo remains to be studied. 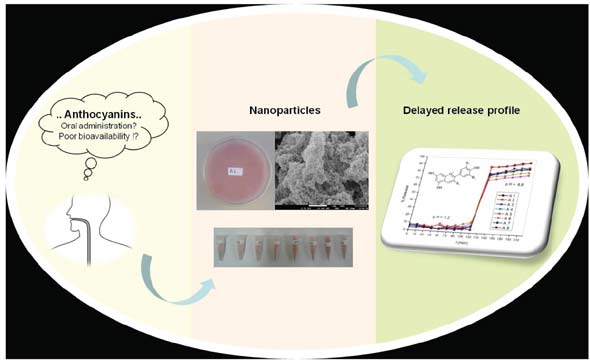