Studies of KP46 and KP1019 and the Hydrolysis Product of KP1019 in Lipiodol Emulsions: Preparation and Initial Characterizations as Potential Theragnostic Agents


Background: Lipiodol (iodized poppy seed oil) accumulates predominately in the tumor rather than in the liver tissue [1, 2]. Therefore, mixing anticancer drugs with Lipiodol may enhance the antitumor effect by increasing the local drug concentration.

Objective: In this pilot study, we made use of Lipiodol as a potential carrier of three promising antitumor metal complexes (tris(8-quinolato)gallium(III) (KP46), tetrachlorobis(indazole)ruthenate(III) (KP1019) and the hydrolysis product of KP1019, mer,trans-[RuCl3(H2O)(Hind)2].

Results: The complexes were stable and remained in the Lipiodol emulsion over 3 days. In contrast to KP1019 and KP46, evaluation of Lipiodol emulsions of mer,trans-[RuCl3 (H2O) (Hind) 2] was not possible due to the insolubility of the compound in Lipiodol. KP1019 released rapidly into the aqueous phase in the first week and after 1 month it was not possible to detect the complex in the emulsion. KP46 showed a gradual release with the time resulting in the release of about 6.4 % of KP46 into the aqueous phase after 1 month of incubation.

Conclusion: The initial results show that Lipiodol can be successfully employed as a carrier of anticancer Ru- or Ga-complexes. Furthermore, advantages can overcome the poor water solubility of the metal complexes, opening new perspectives for the use of Lipiodol emulsions in molecular imaging and cancer therapy as theragnostic agents. 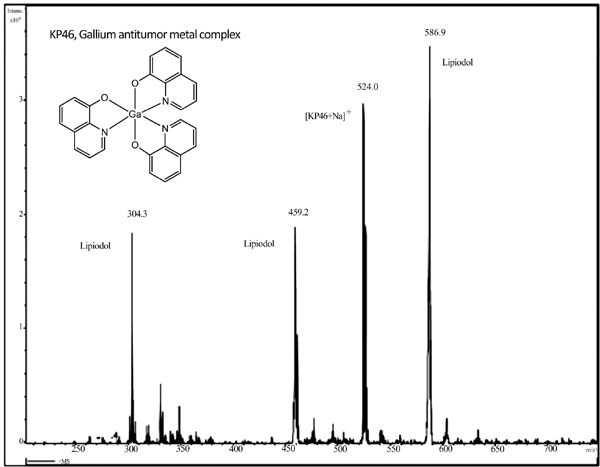