Background: It is well known that the properties of polymers can be altered by exposure to γ- ray. γ-irradiation has been used as a sterilization method for polymeric drug delivery devices, and its drug release profile must not be significantly changed. In this study, the effect of γ-irradiation on the release profile of leuprolide acetate from PLGA-based in situ forming system was investigated.

Methods: Poly(lactide-co-glycolide) (PLGA) was dissolved in N-methylpyrrolidinone (NMP) and irradiated with a total dose of 8 kGy γ-ray emitted by a 60Co source. Then, leuprolide acetate was added to the polymer solution. PLGA-based in situ forming systems were prepared by injecting some specific amount of prepared solution into a buffer phosphate pH 7.4 at 37 °C. The effects of γ-ray on drug release profiles, morphology of matrices and thermal properties as well as stability of polymer were evaluated.

Results: The results showed that γ-irradiation causes a decrease in glass transition temperature (Tg) of PLGA from 43.4 to 38.1°C. A reduction in molecular weight of PLGA by about 17.8 % was found as consequence of radiolytic degradation. The morphological studies of PLGA matrices confirmed that the irradiated sample had higher porosity than the non-irradiated sample. It is found that the amount of released leuprolide acetate from irradiated matrix was increased by about 1.6 times after 33 days compared to the nonirradiated ones. In vitro drug release experimental data were fitted using the Gallagher- Corrigan model which indicated that diffusion and degradation were the predominant mechanisms of drug release. 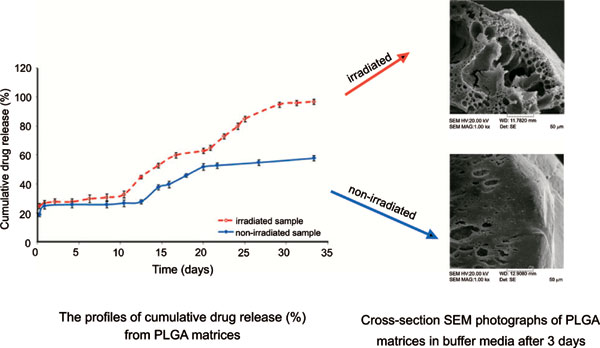