Nanoscience and nanotechnology are emerging areas in the pharmaceutical sciences and the need of modernizing world. Nanoscience is the world of atoms, macromolecular assemblies, macromolecules, quantum dots, and molecules. Nanoscience is the study, and understanding control of phenomena and manipulation of material at the nanoscale. Carbon nanotubes are a tube like material mainly made up of carbon. Only carbon nanotubes are the macromolecules of graphite consisting of sheets of carbon, which is weaved into the cylinder. Graphite sheets look like a hexagonal in shape Nano carbon tubes are about 2 millimetres long and these are one hundred times as stiff as steel. The arrangement of atom in a carbon nanotube is in a form of hexagonal as like as graphite. Carrying capacity of carbon nanotube is 1000 times higher than that of copper thermal stability of it is 4000k, it can be semiconducting or metallic, depending on their diameter and chirality of the atom. These carbon nanotubes having various classifications like single walled CNT's, Multiwalled CNT's, Nano horns, Nano buds, polymerized single walled nanotubes. The review is more focused towards the methods of preparation of nanotubes and their general various applications in pharmacy and medicine along with toxicity. These carbon Nano tubes can be prepared by using various methods with successful ease or application in pharmaceuticals, i.e. gas storage, adsorption, catalyst supported, delivery of drug through targeted system, electrochemistry, bio sensing, fuel cell, photodynamic cells, etc. CNT's are advanced technology in the era of nanotechnology in pharmaceutical sciences which are more emphasizing on patient's compliance and safety. Possessing a broad area of application along with targeted drug delivery. The Scientists are still exploring the various applications of it. 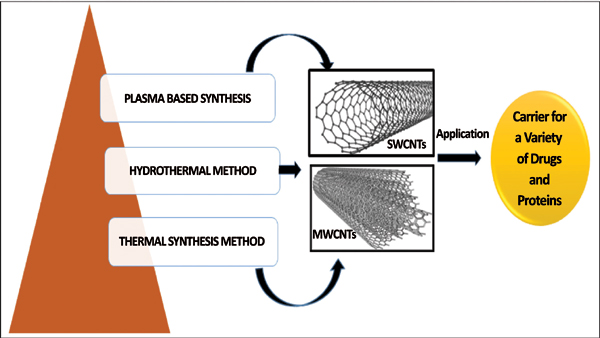