Introduction: In the past few years, the use of antimicrobial drugs against a wide range of pathogens has increased significantly. This extensive use of drugs has increased the resistance rate in microbial community widely. Molecular techniques for the detection of resistance are more reliable as compared to the conventional phenotypic method.

Background: The family Enterobacteriaceae is considered to be an important cause of nosocomial infections due to its predominantly active species such as E. coli, Klebsiella and Pseudomonas. These organisms are mainly involved in causing pneumonia, sepsis, post-surgical and urinary tract infections. Resistance against antimicrobial drugs among these isolates is increasing more rapidly all over the world. This study primarily focuses on the resistant isolates of Klebsiella species. The drug resistance in Klebsiella isolates is found to be associated with the production of resistance enzymes such as beta lactamase and extended spectrum beta lactamase (ESBLs) which confer resistance, most specifically against cephalosporins and extended spectrum cephalosporins. Since these enzymes are plasmid mediated, they can also produce resistance against several other antimicrobials. It has been found that among the genus Klebsiella, ESBLs are more prevalent in K. pneumoniae followed by K. oxytoca.

Methods: In this study, we estimated the distribution of ESBL producers among Klebsiella species and performed their genetic characterization. A total of 236 gram-negative isolates were collected from different microbiological laboratories, during the period January 2010 till January 2012. Among these gram-negative isolates, 125 were identified as Klebsiella species. After species identification, Kirby Bauer disk diffusion method was used for antimicrobial susceptibility profiling. Furthermore, the phenotypic detection of ESBL producers was performed by double disc synergy and combination disc methods. Resistance genes responsible for the production of beta lactamase and extended spectrum beta lactamase enzymes were detected by Polymerase chain reaction. DNA sequencing was performed by selecting an ESBL producing Klebsiella pneumoniae strain with a positive blaTEM gene.

Conclusion: Since there is an intense need of research in the field of drug resistance for implementing strict antibiotic control policies in hospitals, health care centers, laboratories, etc., the present study is dedicatedly conducted to estimate the drug resistant Klebsiella isolates, specifically the Beta lactamase and Extended Spectrum Beta Lactamase producers, at molecular level. 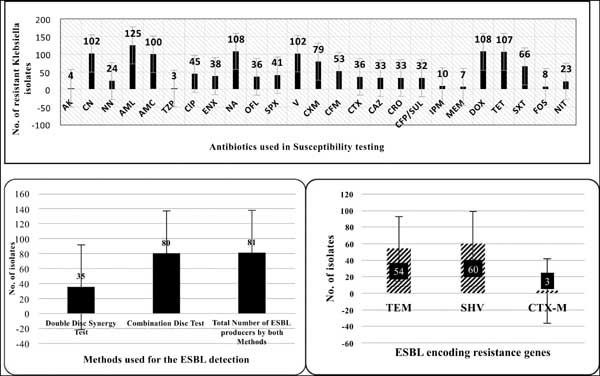