Objective: The objective of this study was to evaluate the suitability of a ternary mixture of smart polymers comprised of Eudragit®E100, Eudragit®L100, and sodium alginate to serve as a carrier for sustained drug release for weakly basic drugs. The model drug chosen in this part of the study is Metronidazole.

Methods: Matrix tablet formulations were prepared by either direct compression or by wet granulation. Dissolution studies were conducted using USP XXΠ rotating paddle apparatus in three different consecutive stages (pH 1.2, 4.8, and 6.8). Tablets made of low to intermediate proportions of sodium alginate and approximately equal proportions of Eudragit®E100 and Eudragit®L100 were found to have a significant modification of drug release rates.

Results: Thus, indicating a potential for controlling the drug release for 12 hours depending on polymers ratios in the formulation. The ratio of sodium alginate to total Eudragit® polymers and the ratio of Eudragit®E100 to Eudragit®L100 within the ternary polymeric composition were found critical in determining the controlled release performance.

Conclusion: Results of swelling studies were in agreement with the dissolution behaviors of the tablets. The findings suggest the significance of the ternary polymeric compositions in controlling the release of a weakly basic drug, Metronidazole. 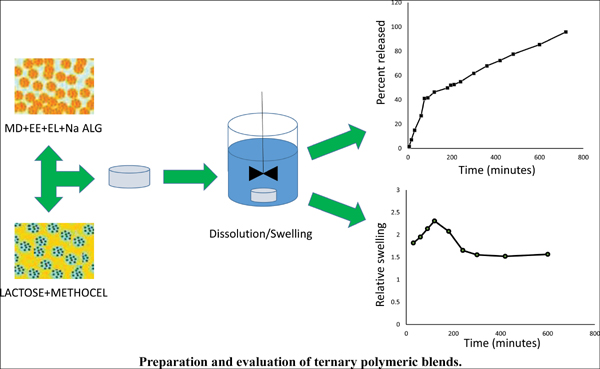