Background: In this work the cytotoxicity and gastric and gastrointestinal resistance of a high-load synthetic expandable mica, Na-mica-4, is studied for the first time. The hydrophilic character of this clay mineral can be modified by ion exchange reaction between Na+ inorganic cations housed in the interlayer space, and surfactant molecules, resulting in the formation of an organophilic material. This adsorption capability of organic compounds makes them very useful for a wide range of applications, such as their use as drug carriers. Previous studies have shown the high adsorption capacity of organofunctionalized Na-mica-4 of different types of drugs.

Objetive: To carry out initial trials aimed at testing the cytotoxicity of a synthetic organofunctional expandable mica and evaluating its resistance to gastric and gastrointestinal digestion.

Results: Only one of the endpoints evaluated (the reduction of tetrazolium MTS salt by dehydrogenase enzymes) showed a significant decrease in cellular viability after 48h at the highest concentration tested. C18-mica-4 shows structural resistance to both, gastric and gastrointestinal, digestion.

Conclusion: A successful development of a functionalized mica has been made with a promising potential application as a carrier to the drug. 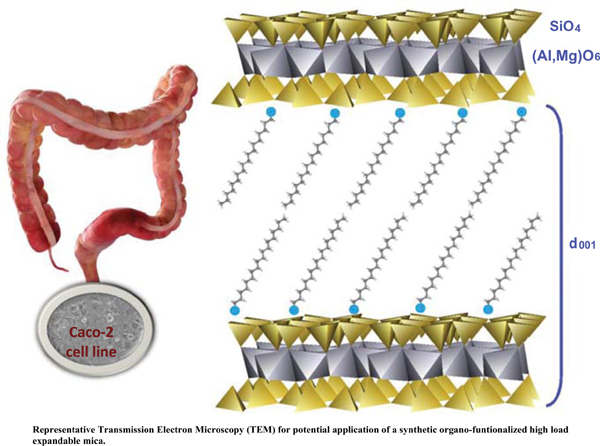