Introduction: In the working age population, Diabetic Macular Edema (DME) is the most common cause of visual loss.

Purpose: The present study is aimed to assess the safety and efficacy of intravitreal injection of Ranibizumab (IVR) versus intravitreal Dexamethasone implant (IVD) in patients with DME in a tertiary care centre upto 4 months.

Methods: This is a comparative, prospective, randomized study that was done on 140 patients with macular edema confirmed on optical coherence tomography (OCT). IVD group received Ozurdex® (Allergan, Inc, Ireland) while the IVR group received Lucentis® (Novartis, Basel, Switzerland); the groups were followed up at day-1 and weeks 4, 8, 12, 16. Patients were divided into Group A, in which patients were given 3 doses (monthly) of IVR 0.3 mg in 0.05 ml (n=70). Group B patients were given a single dose of IVD implant 0.7 mg (n=70).

Conclusion: Both intravitreal Ranibizumab injection and Dexamethasone implants were found to be safe and effective in lowering CMT and improving BCVA at the 4-month follow up in patients with DME. Since there was no recurrence of CMT in the Dexamethasone implant group, we suggest that early administration before the 4th month may indicate superior efficacy over the ranibizumab injection. Further randomized trials in a large sample size with a longer period follow- up would be performed to justify the obtained results in the present study. 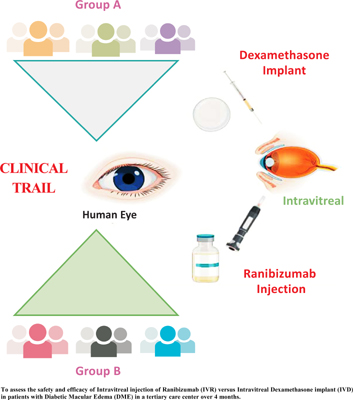