Results: The experimental results revealed that swelling and drug release were influenced by the pH of the medium being low at acidic pH and higher at basic pH. Increasing the concentration of chitosan and AA enhanced the swelling, drug loading and drug release while AMPS was found to act inversely.

Conclusion: It was confirmed that the hydrogels were degraded more by specific enzyme lysozyme as compared to the non-specific enzyme collagenase. In-vitro cytotoxicity suggested that the unloaded hydrogels were non-cytotoxic while crude drug and drug-loaded hydrogel exhibited dose-dependent cytotoxicity against HCT-116 and MCF-7. Results of acute oral toxicity on rabbits demonstrated that the hydrogels are non-toxic up to 3900 mg/kg after oral administration, as no toxicity or histopathological changes were observed in comparison to control rabbits. These pH-sensitive hydrogels appear to provide an ideal basis as a safe carrier for oral drug delivery. 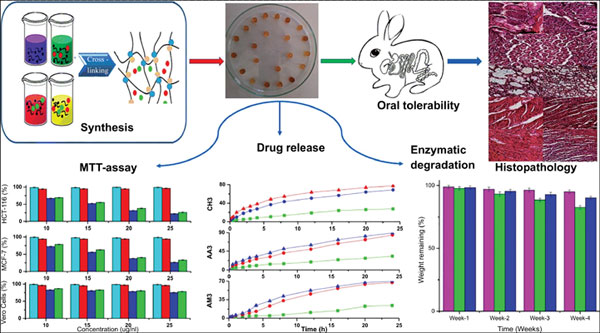