Development and Characterization of Olanzapine Loaded Poly(lactide-co-glycolide) Microspheres for Depot Injection: In vitro and In vivo Release Profiles


Purpose: The purpose of this study was to develop a new PLGA based microsphere formulation aimed to release the olanzapine for the period of one month which will result in increased compliance.

Results: The morphological results indicated that microspheres produced were having a smooth surface, spherical shape and the size in the range from 9.71 to 19.90 μm mean diameter. Encapsulation efficiency of olanzapine loaded microspheres was in the range of 78.53 to 96.12% and was affected by changing the ratio of lactic to glycolic acid in copolymer PLGA. The properties of PLGA and other formulation parameters had a significant impact on in vitro and in vivo release of drug from microspheres. In vitro release kinetics revealed that release of drug from microspheres is by both non-Fickian diffusion and erosion of PLGA polymer. In vivo data indicated an initial burst release and then sustained release depending on properties of PLGA, microsphere size, and bulk density.

Conclusion: This study indicates that microsphere formulations developed with PLGA (75:25) and PLGA (85:15) have provided a sufficient steady release of drug for at least 30 days and can be potential candidates for 30-day depot injection drug delivery of olanzapine. 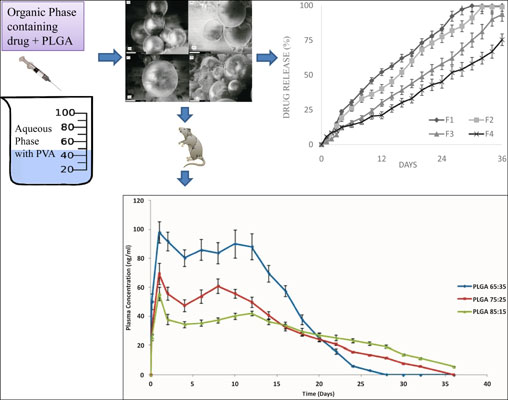